More hawkish hints of the future policy of the US Federal Reserve were a determining factor for further gains of the US dollar against other major currencies. Accordingly, the beginning of this week’s trading was revolutionary for the price of the USD/JPY currency pair, as it tested the resistance level 120.46, which is stable around it at the time of writing the analysis, and the highest for the currency pair in five years.

Yesterday Federal Reserve Chairman Jerome Powell said the US central bank is ready to raise US interest rates by half a percentage point at its next meeting if necessary, using a more aggressive tone toward curbing inflation than it used a few days ago. Policymakers raised the benchmark lending rate by a quarter point at their meeting last week ending two years of borrowing costs close to zero. It pointed to six more increases of that size this year, based on the average projection. Powell indicated that half a point hikes may be up for discussion when policymakers meet in the next 3-4 May and in subsequent sessions.

“If we conclude that it is appropriate to move more aggressively by raising the fed funds rate by more than 25 basis points at a meeting or meetings, we will,” Powell said in a letter titled “Restoring Price Stability” to The National. After his official remarks, Powell asked if there was anything stopping policymakers from hiking half a point in May, which would be the first increase of that size since 2000. “What’s stopping us?” he replied. Nothing: Executive summary,” he said as the audience laughed. He added that such a decision had not been taken but acknowledged that it was possible if the incoming data required. “My colleagues and I may come to the conclusion that we will need to move more quickly and if that is the case we will,” he added.

According to the technical analysis of the pair: Today’s gains are important for more bulls to control the direction of the USD/JPY currency pair. Breaking the 120.00 psychological resistance raises urgent questions about the future, and the response depends on the reaction from Powell’s statements and global developments about the continuation of the Russian war and its consequences for the future. The Euro’s gains moved the technical indicators towards strong overbought levels. We warn against activating the selling operations to take profits at any time, as the markets priced before Powell’s statements more times to raise the US interest rate during the year.

Currently, the closest ascending stations are 120.55 and 121.20, respectively, and on the bearish side, and according to the performance on today’s chart, breaking the support 118.20 will be important in anticipating the break of the current ascending channel. The currency pair is not anticipating important and influential US economic data and therefore investor sentiment will be important in determining the trend. 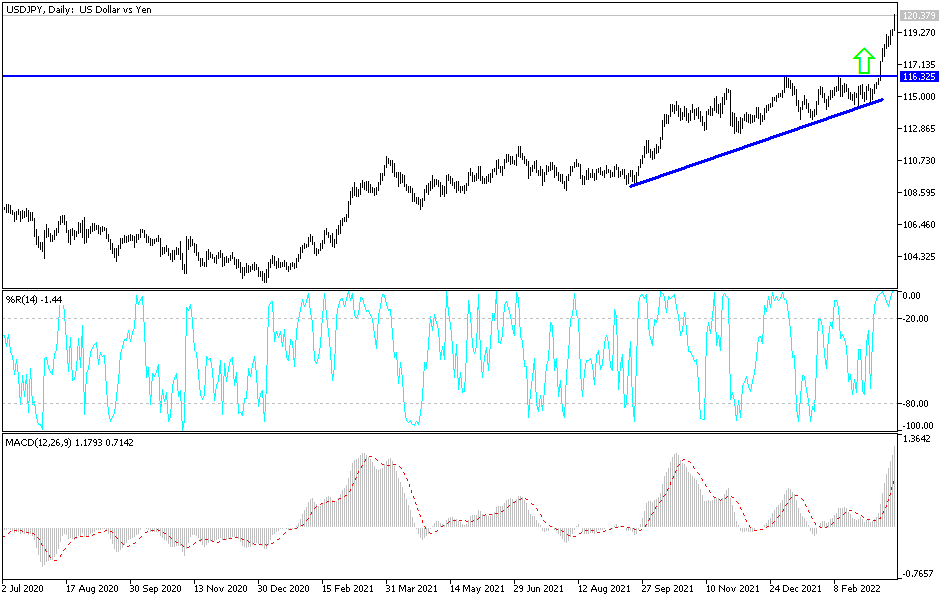